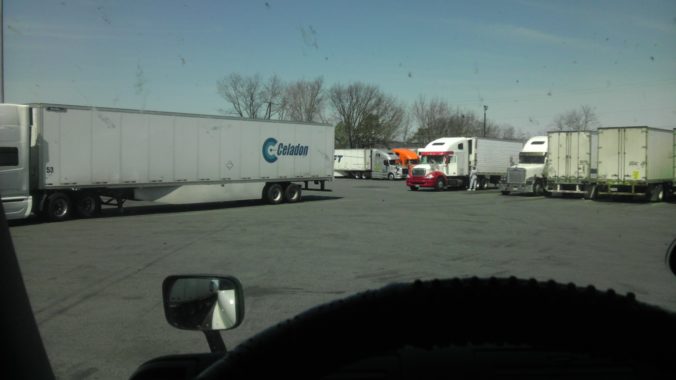 Behind the Wheel Part 2: Over-the-Road

As truck after truck passed in the left lane, I kindly flashed my low beam headlights to signal that there was a safe distance for the passing truck to merge over, as is a common courtesy to do among truck drivers. The low hum of the engine coupled with the faint high-pitched wine of the turbo saturated my auditory sense as I gracefully guided the truck down the road towards its destination and casually bounced up and down in my air ride seat with the contact of every bump and dent in the road. As hour by hour and mile by mile passed, night’s darkness turned into dawn’s sunrise followed by day’s brightness.

As Jim and I inched our way across Virginia and towards Pennsylvania, we encounter a mix of flat lands and rolling hills. One such incline was so steep and long that as I powered up it the truck struggled to maintain highway speeds. The engine hum was more intense and the high-pitched wine of the turbo was even higher as gravity battled 40 tons. Gravity slowly started to win and forced me to downshift gears and lose speed, but I was determined to make it to the top of the hill! As I dueled it out with the hill in the right lane, I noticed a semi truck pulling a set of double trailers driving up the on-ramp adjacent to my lane, and the truck was inching closer to me as it also battled the hill and gravity to maintain speed. The truck was slightly ahead of me so I naturally backed off of the fuel pedal to give room for the driver to merge over, but as I did so my trainer immediately advised me against doing so, warning that if I didn’t keep the fuel pedal fully pushed down that we would lose too much speed and have an even more difficult time making it up the hill. As advised I kept the fuel pedal pressed down fully and the slow climb to the top continued. Eventually we reached the top and won the battle, and off we went down the road until the next hill challenged us.

We eventually left Virginia and passed through a small portion of West Virginia and Maryland before finally reaching Pennsylvania, where we continued northeast and traversed the mountainous terrain until finally reaching our destination in Pittston, Pennsylvania. After dropping our loaded trailer and picking up an empty trailer, we headed over to the local Pilot Travel Center in Pittston to await our next load assignment. Just as an airplane must land at the end of its journey, a truck must park at the end of its voyage, and that usually means backing into a parking spot.

Learning to back a truck properly is usually one of the trickiest maneuvers for any novice truck driver to master, and even trickier when performed at the end of a long, fatiguing shift. When the added pressures of impatiently waiting drivers and peering eyes of parked fellow truck drivers are thrown into the mix, the task becomes even more intense, especially since many truck stop layouts don’t allow for much wiggle room when maneuvering and since one wrong move could cause thousands of dollars  in damage to unsuspecting vehicles or property.

Well when it came time for me to park, Jim instructed me to back into an empty parking stall between two parked trucks. He hopped out of the truck to spot for me as I drove forward in a serpentine manner to setup for the back. As I caught the eyes of a fellow driver staring at me from a truck parked across from my position, I found myself in the spotlight and immediately knew that all eyes were on me, as many truck drivers intensely wait to see if a fellow driver backing up will back a truck into a stall in one go or take 15 minutes to park the rig, or will back up without an incident or hit an adjacent truck while backing.

I put the truck in reverse and slowly released the clutch and turned the wheel to the right as I peeked out of my driver’s side window to monitor the jackknifing trailer. The pressure was up, the spotlight was on me, and I turned the wheel as necessary to keep the end of the trailer aimed towards the open stall, making sure to line the trailer up sooner rather than later so that my trailer overhang wouldn’t strike the truck parked on the far side of my stall. This was my first time reverse parking a truck in the “real-world” outside of the controlled environment presented in truck driving school, and I was quite proud of myself for doing such a great job so far, and for most importantly not hitting anything, at least not yet! As the truck slowly backed up in low reverse gear, I straightened up my jackknife and continued to back into the stall. After a pull-up or two to center the truck in the stall, I set the parking brakes and Jim hopped into the truck to congratulate me on doing such a great job, given that it was my first time reverse parking a truck over-the-road. I sat there for a moment and let what I had just accomplished sink in a bit as we awaited our next load assignment.

Backed into a parking stall at the Pilot Travel Center

Backed into a parking stall at the Pilot Travel Center

Behind the Wheel Part 1: Rise and Shine

An Unexpected Last Day in France