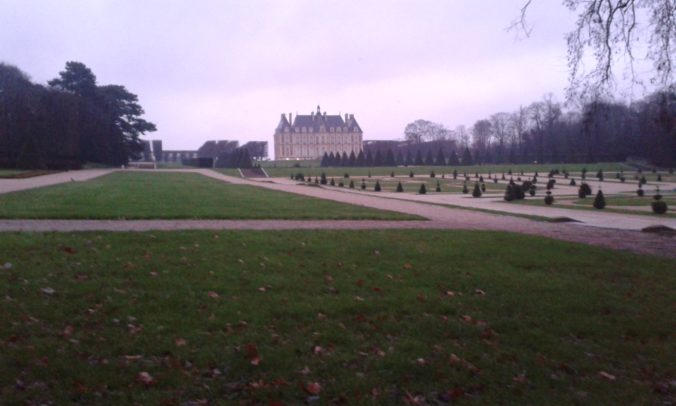 After leaving my favorite restaurant in Sceaux, Laura and I decide to explore the majestic park that I had told her about. This park had been one of my favorite spots in France to go and relax at since I first discovered it during my 2010 study abroad program in France. The park contained endless scenic views along with a nicely-sized château, and it had been nearly 17 months since I had last visited the park, so I was naturally overdue for a visit.

The park was only a five minute walk from the restaurant, and as we passed by shops along the way Laura and I stopped at a café to grab her some coffee to help combat the chilly December air. This gave me another opportunity to practice my French since Laura spoke very little of it. “Un café s’il vous plaît” I said, while making sure to add “avec du lait aussi” after Laura asked me if milk could be added to the coffee. We left the café and passed by more shops as we headed towards Parc de Sceaux.

A few minutes later we were walking into one of the many entrances to Parc de Sceaux. The park was eerily quiet and void of humans with the exception of maybe two or three people lingering around. I had seen days where there were easily 100+ people walking and running around the park, but definitely not today! As the sun proceeded to set and the mid-December day darkened with every passing minute, I took Laura on a brief walk around a section of the park to show her around one of my most favorite chill spots in France. The lifeless park, leafless trees, and cloudy, darkened skies gave off a spooky but intriguing vibe, a vibe that screamed “let’s explore this big, empty space!” yet yelled “get out of here now!” Which voice would we listen to and follow?

As I looked around for him I wondered where he went off to. A few minutes earlier I saw a jogger nearby, but he was nowhere in sight now, neither him nor anybody else for that matter. Well it was getting darker by the minute and now it was after 5pm, so we decided to walk back towards the entrance and leave the park. As Laura and I walked across the center of the park towards the entrance, we  took in one last sight of the majestic Parc de Sceaux. The last time I saw this place was in July 2013, and wow, what a contrast between then and now! The summer crowd of families relaxing and playing about in the green fields and the warm, sunny July weather was now replaced by a desolate, gloomy park and chilly December air. I was grateful to experience both extremes of the park.

As we approached the entrance that we had entered in, we noticed that the gate was locked! Uh-oh, the park must have closed at 5pm! The fence around the park must have been around nine to ten feet tall, and the way that it was designed would have made climbing it tricky.  Well Laura and I decided to walk the perimeter of the park to see if any gates were open. As we were walking we noticed two teenage guys who were also trapped inside jumping the fence at one area along the perimeter. One guy managed to jump the fence and his friend followed suit after several failed attempts. Well it seemed that jumping the fence was doable but definitely tricky, so we decided to keep walking the perimeter in hopes of finding an open gate.

By this point in time, it was noticeably dark outside and the temperature had dropped along with the level of natural light. After walking for several more minutes Laura and I came across a large gate at an entrance, and sadly the gate was also closed. Well by this point we were both convinced that continuing our journey around the perimeter was pointless since all of the gates were most likely closed and locked, so we decided that it was time to attempt jumping over the fence here. We both picked a spot on the fence and slowly started climbing it. What made the fence tricky to climb was that there were hardly any points to grab or place our feet on the fence besides the vertical bars, so we muscled our way up the fence grab by grab. At the top of the fence were spikes which gave the fence its aesthetic appeal, great for historic looks but not so great for trying to jump over. Laura finally reached the top and grabbed onto the gate to propel herself over and down the other side of the fence, but my journey was a bit more tricky since I didn’t have the gate to grab onto. So as I approached the spikes at the top I did my best to balance myself so that I didn’t slip and fall onto them as I crossed the top, and as soon as I cleared the spikes I jumped down onto the other side.

We made it! Laura and I embraced each other in joy as soon as we were both back on solid ground and free of the grapple of Parc de Sceaux. As we were standing there, the headlights of a car slowly came into view as the car turned down the short road leading to the park entrance that we were standing in front of. We quickly walked out of the area and back towards the RER station so as to make our way back to Paris. As always it was nice visiting Sceaux and the park, and Parc de Sceaux was grateful enough to give us a memorable experience to tell others someday. Thanks Parc de Sceaux, and until the next time we meet again…